In 2009, Claire Snyman began to notice she was having difficulty with her short-term memory. Things that she normally had no problem remembering became harder to recall. On May 14, 2010, at the age of 34, she woke to the room spinning. Claire was experiencing her first vertigo attack. Two days later, she developed her first migraine. 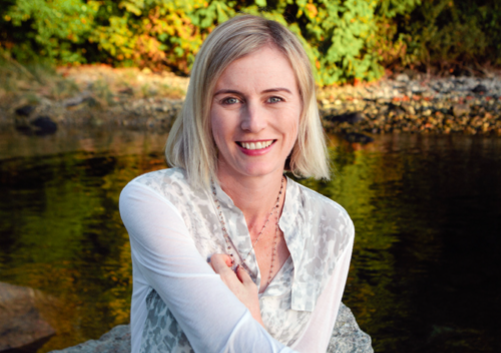 Thinking this was the symptoms of a virus, or from working too hard, she contacted her general practitioner (GP) for advice. Worried that her symptoms might be caused by meningitis, her GP suggested she go to the emergency room (ER) to get checked out. While lying on the CT scan table, Snyman briefly hoped there was nothing inside her brain that should not be there. Though a fleeting thought, she never thought more about it until she overheard doctors discussing a patient who had a rare brain tumor just outside her room. She began to feel empathetic towards whoever they were talking about. Someone’s life was quickly going to change forever.

During her time in the ER, it never occurred to her that a tumor could be causing her symptoms. She had remained focused on receiving a definitive diagnosis, receiving a treatment plan and then returning home. When the doctors walked into her room carrying the results of her scan, her life changed forever.

“You have a benign brain tumor — a colloid cyst,” said the ER doctor.

At the time of diagnosis, the suggested treatment for her tumor was to “watch and wait”. Surgery was not the recommended option based off her symptom profile and latest MRI, even though her cyst was of medium to large size. Her neurosurgeon warned that the risks of surgery outweighed the benefits. After seeking a second opinion who recommended the same course of treatment, she decided that surgery on her tumor at this time was not the right move and took her place on the “watch and wait” list, with other tumor patients throughout the world.

Each year, Claire underwent MRI scans to monitor the size and growth of her tumor. From a medical perspective, she was well-looked after due to scheduled scans, support from her neurosurgeon and neurologist, in addition to the medications to help control pain from any migraines she experienced. Regardless, she had to learn to become her body’s own advocate when conflicting medical opinions were received — she needed to be the one to make the right decisions for herself. When her local specialists discontinued her yearly MRIs, she decided to continue care with her second opinion surgeon, Dr. Quinones-Hinojosa at Johns Hopkins Bayview Medical Center in Baltimore.

What she struggled with most following her diagnosis was the acceptance of the uncertainty about the future. This feeling could not simply be relegated to a medical department and laid to rest. But with time, she was able to find her own way of coping by ensuring she was surrounded by her positive family, friends and medical team.

In August 2012, she began experiencing vertigo and suffered through an unrelenting 10-day migraine. An MRI scan, requested by Dr. Quinones, revealed Snyman’s tumor had doubled in size and, as a result, she had developed obstructive hydrocephalus. She felt that her body had gone into survival mode at this point and understood the only option for her life to continue was to undergo tumor removal surgery.

In the days before her surgery, there was a lot to sort out. On the plus side, Snyman did not feel an overwhelming sense of fear or trepidation about the procedure. The ‘brain fog’ she was experiencing at this stage prevented her from thinking too much about it. Also, this surgery was going to help her feel better, more like herself, and she knew this surgery had to happen. However, it was not until she was lying on the table in the operating room that it finally felt real to her.

Upon waking, on August 31, 2012, Claire knew she had made it through her surgery. Although this was a big step in her treatment, she knew the next step was just as big, possibly bigger: recovery. The recovery process from such a major surgery was nothing like she thought it would be – it was longer – and it was harder.

Learning to Listen to Your Body

She took some comfort in knowing that one day, when this was over, she would pay it forward for having come this far. Recovery can be different for each person. Some progress rapidly while others progress at a slower rate. Remembering that she was constantly moving forward, one step at a time, brought her comfort.

Beginning just three days following her surgery in the ICU, she walked. She walked around the ICU even if it was just for a few minutes. Walking each day helped her mark her progress. However, chronic fatigue and short-term memory problems provided her with daily challenges. Later, she struggled with vestibular migraines and imbalance.

As she began to gain her strength back, she was able to walk outside, breathe the fresh air, see the outside of her house and feel like she was part of society once again.

As her recovery progressed, it was important that she continued to listen to her body and brain. They both needed an immense amount of sleep. If she did not listen, she would hit a brick wall. She napped for nearly two hours a day until she was one-year post-op. She struggled with this at the beginning, as she felt it greatly interfered with her day. Each day was planned around her napping schedule.

Regardless of how inconvenient the napping was, she quickly learned it was actually the key to her recovery. When she eventually stopped napping, it was her brain’s way of telling her it was ready to get back to life. Even to this day, three years post-op, if she feels like she is overdoing it, her brain will tell her to slow down, and she will take a quick nap. She learned by resting when necessary, that she began to recover more quickly. She also found mindfulness meditation helped her brain relax, which allowed her to take more restful naps and fall into deeper sleep. Snyman still uses this technique today and feels that small steps in the right direction kept her moving forward with recovery.

For her short-term memory issues, Snyman started to make lists. Later, she used memory games to challenge herself. As she progressed, she would try to remember things from her lists without referencing them. It was a victory when she remembered things, and with time, she had more and more victories.

Snyman’s support group was key during her recovery process and she leaned on them continuously. Her family and friends served as pillars of strength and helped her work through her feelings throughout the process, both physical and mental.

Time has taught her to have great respect for her body and brain and a gratitude for life, family and friends. Snyman says she is continuously grateful for the new version of herself that she has found in the three years following her surgery. She is able to do almost everything she used to be able to do but with a much deeper appreciation of “breathing in the small things,” which she referred to as a realization that being in the present is the best place to be. She continues to not take her health for granted and embraces each day, two steps at a time.

Following her surgery, Claire began to keep a daily journal to help deal with the flurry of emotions she was feeling. Recently, she turned this journal into a book, "Two Steps Forward – Embracing Life with a Brain Tumor." This book is her way of paying it forward and giving back for where she is today. She wrote this book in hopes that it will help others who have been through similar life challenges to know they too can move forward with small steps.