In mid-September 2004, two weeks before my wedding date of Oct. 2, I was at work and suddenly lost my right field of vision. I tried to ignore it for a few minutes, but it was not going away. I left my job early at a weekly business newspaper in St. Louis and took the train to where my car was parked. By this time, my right arm, the right side of my face, mouth, tongue and even my right teeth were numb, and I still could not see correctly. Somehow, I managed to drive my manual transmission Honda home. Dan, my soon-to-be husband, wanted to take me to the hospital, but I said it was just a migraine and I would be fine. 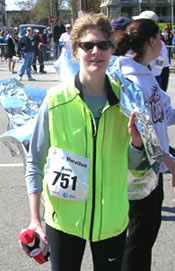 The next day, he and my boss insisted that I call the doctor. The doctor was concerned that it was a TIA, although I did not fit the profile. He ordered an MRI and an MRA. One week before my wedding, I had the MRI, which didn’t show anything abnormal. The doctor had to convince the insurance company to pay for the MRA, which did show something behind my left eye. After returning from our honeymoon in Arizona, I went to see a neurologist, who diagnosed this as a complicated migraine and ordered a CT scan. The CT revealed a 6 mm aneurysm behind my left eye at the intersection of my carotid and ophthalmic arteries.

I was referred to Ralph Dacey, MD, a neurosurgeon at Washington University School of Medicine and Barnes-Jewish Hospital in St. Louis, whom I saw for the first time one month after my wedding. Christopher Moran, MD, a neuroradiologist, performed an angiogram the day before Thanksgiving, which confirmed the aneurysm and he recommended it be removed through endovascular coiling.

Although I was very active and had been taking spinning, kickboxing and strength-training classes for several years, I began running, just around the neighborhood to burn off some stress related to this situation.

In late January 2005, I went to Barnes-Jewish Hospital for the coiling procedure. When I awoke – much earlier than I had expected – the nurse told me I had an angiogram. I said, "No, I had coiling done." We went back and forth for a while, and several hours later, Dr. Moran stopped by and explained to me that he could not do the coiling procedure because it would have caused me to lose my vision.

Dr. Dacey told me that it was my decision whether I wanted to take a "wait and see approach" or have surgical clipping, which of course, would involve a craniotomy. I contemplated this for a bit, hoping it would just go away and I could continue with my life and enjoy being a newlywed.

I focused on training for the annual St. Patrick’s Day 5-mile run in St. Louis, which helped me keep my mind off of my situation. I was training with a group of women from my YMCA branch and enjoyed being with people who didn’t know of my condition because I could talk about something other than my aneurysm.

A turning point came one evening, when I was running with one of our dogs Luke, while my husband walked our other two dogs. I was running on a secluded, dead-end road and dropped Luke’s leash so he could sniff around. All of a sudden he ran away from me towards the main road and would not come back, despite my yelling. When I arrived at the main road, Dan was standing there with Luke and the other two dogs. He was terrified because he thought my aneurysm had burst and I was lying dead in the woods and Luke was heading home without me. My husband told me how scared he was that something had happened. I thought about it that night and realized it was not fair to him and everyone else to have to live in constant fear that my aneurysm would burst and I could die. The next day, I called Dr. Dacey and said I was ready for the surgery, which was scheduled for April 25, 2005.

Before surgery, I completed the St. Patrick’s Day run and was part of a marathon relay team with my YMCA friends in the St. Louis Marathon on April 10, 2005, completing a 6.2 mile-leg.

Dr. Dacey’s nurse, Dawn Weinstock, told me to call her anytime with questions, so I felt very comfortable calling. She always answered my questions and never made me feel like I was interrupting her busy schedule. I was never terribly nervous about the surgery itself – I trusted Dr. Dacey completely and knew that I was in the best hands. As I was being prepared for surgery, signing forms and answering questions, Dr. Dacey came by to say hello and explained further details about the surgery. I held his hand and told him I trusted him. I felt very comfortable.

During my eight-hour procedure, Dr. Dacey’s staff came out to the waiting area and provided Dan and my parents with updates. This was very comforting for all of them, and they told me later they felt like Dr. Dacey’s staff cared enough to make it a priority to keep them informed.

I spent one night in intensive care and was moved to the neurosurgery unit the next morning. I don’t remember much about the few days I was hospitalized, other than that I couldn’t wait for the physical therapist to come by so I could get up and walk and stretch my very sore legs. I was up and walking alone two days after surgery because my back and legs hurt so much from lying down. The staff was very good to me and had to help me with bathing, turning over, getting out of bed, etc. I refused to look in a mirror because I could feel how swollen the left side of my face and neck were, and I did not want to see the incision from the craniotomy.

Dr. Dacey told me after the surgery that the aneurysm was very thin and it was a good choice to take care of it when we did.

I had brought a book to read while in the hospital, but I couldn’t see the print. The letters on the page were swimming around and I couldn’t focus. I continued to have this over stimulation problem for nearly a year after surgery.

I was on medical leave from work for 10 weeks and did not drive for eight weeks. I was exhausted all the time, but I could not sleep. The dilantin kept me awake, which made me very crabby. Even a sleeping pill didn’t help. I spent most nights working on a big puzzle.

I went to physical and occupational therapy for a few weeks, where I had to relearn how to type. In my first typing "test," I typed 22 words a minute, a far cry from the 75-85 words per minute I typed before the surgery. I also had mild aphasia, which was very frustrating for me. A lingering effect of the surgery was hyperacusis (acute hearing). Noises such as a train whistle were deafening and actually caused me to start crying on one occasion.

Shortly after the surgery, I started pestering Dr. Dacey about when I could run again. He finally said I could take “baby steps” in July, about the time I went back to work. Although I came home from work completely exhausted, I started slowly and gradually increased my distance. I ran a 5K that September – my slowest time ever, but it felt good. I ran a few other 5Ks that fall, and after the holidays, I decided to train for the half marathon at the Spirit of St. Louis Marathon Weekend on April 6, 2006. I completed the half marathon in 1 hour and 48 minutes, which is not bad for someone who had brain surgery less than a year prior. When I found my husband at the finish line, he broke down in tears. It was a great end to a long year and a half.

In September 2006, I ran my first full marathon – the Lewis & Clark Marathon in St. Charles, Mo. It was a small field, so I finished third in my age group, although I did not do as well as I wanted (4:01:49). I ran the full marathon at the Spirit of St. Louis Marathon Weekend on April 15, 2007. Because of my previous experiences there, it is a very special event for me. I finished in 3:42:28, which qualified me to run in the 2008 Boston Marathon.

Two years later, I still have the hyperacusis and have to wear earplugs frequently. I also have continued numbness on the left side of my head, face and neck where the incisions were made and my hair doesn’t lay right where the skull was divided. I still get tired very easily and occasionally get complicated migraines. But I am thankful that I was referred to Dr. Dacey at the right time. These minor inconveniences are just that – minor – compared to what could have happened to me.