On May 3, 2009, 9-month-old Luke Masse suffered what could have been a fatal traumatic brain injury (TBI) from a fall: a subdural hematoma. Luke was doing what millions of babies do without incident – standing and exploring the early stages of walking. In Luke’s case, he was standing on a carpeted surface when he fell and hit his head. 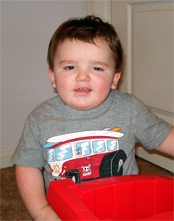 Kimberly Masse, Luke’s mother, was so profoundly affected by Luke’s injury and survival that she founded the Pediatric Brain Injury Foundation in honor of Luke and to help other parents.

Within just a few minutes of falling, Luke became unresponsive, began posturing and was rushed to the local hospital. A CT scan showed a subdural hematoma on the left side of his brain. He was intubated and transferred by helicopter to Children's Hospital Central California.

He was taken to surgery to relieve the pressure and evacuate the clot. Dr. Woodward made the decision to create a burr hole first (as opposed to a full skull flap) and I believe this decision saved his life. He had torn the sagittal sinus (vein) and had continued to bleed in the nearly six hours that had transpired between falling and undergoing surgery. He had no coagulation factors left, and the bleeding was difficult to stop.

At that point during surgery we were told he would not survive. He had bled too much and they didn't know if they would be able to get his blood to start clotting again soon enough.

He did survive surgery, but came back to the ICU with intracranial pressure (ICP) of 60. Through the night with aggressive treatment, his ICPs dropped into the 30s and then 20s and stabilized to a manageable level. 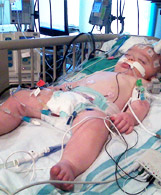 Throughout the next 11 days, we were told it was unlikely Luke would ever wake up. His ICPs had once again spiked too high, he was showing subclinical seizure activity on his EEG and his CT scans were of concern.

However, Luke had quite a different idea. On Mother’s Day 2009, he opened his eyes, and a week later he was transferred to the hospital’s rehab unit. He had a subdural shunt placed at that time and, during the next year, would have a revision and then a VP shunt placed.

A month after his fall, he was discharged home and continued his rehabilitation as an outpatient at Children's Hospital.

Because of the amazing care from Dr. Woodward and Dr. Magram, as well as every team member who participated in his care at Children's Hospital, Luke defied all odds. From a medical standpoint, he shouldn't be with us today, or in the capacity that he is functioning. Yet 15 months later, he is a vibrant 2-year-old who recently started walking, has an amazing personality and is quite mischievous. He has right-side hemiparesis affecting his arm and hand but, with therapy, is improving noticeably week by week.