Morgan was playing baseball in the front yard with her dad and brother, Matthew. A line drive hit by her dad struck Morgan in the head above the left temple. Her dad and I iced down the bump and the swelling subsided within an hour. Morgan felt fine: she did not have any symptoms of a concussion or serious head injury, such as blurry vision, confusion, dizziness, trouble speaking or walking, and she did not pass out. 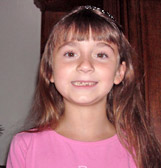 Morgan participated in normal activities for the next two days, including eating, sleeping, playing with her brother and attending school. At bedtime, two days after the accident, Morgan complained of a bad headache. We took Morgan to the local ER, and along the way, she vomited and became lethargic. The CT scan at the ER showed blood in the brain.

Dr. Cohen sent the Medevac helicopter to transport Morgan from LakeWest Hospital to Rainbow Babies & Children's Hospital, her dad at her side. The ride took just six minutes, as opposed to the 30 minutes it would take by ambulance. Arriving shortly after midnight, within just three minutes of her arrival, Morgan was in emergency surgery. Dr. Cohen and his team at Rainbow performed a craniotomy to remove the hematoma, which saved Morgan’s life. She was in the hospital for four days and is now home and expected to make a full recovery.

We are very grateful to Big Al (Dr. Cohen) for the lifesaving surgery he performed on Morgan. Morgan is delighted with her celebrity status, having been featured on local TV and radio, as well as nationally on CNN, Good Morning America, Inside Edition, Access Hollywood, Entertainment Tonight, Fox & Friends, Canada AM and in several print publications.