574. Complication Rates of PICC and CVC Lines in the Neuro-Intensive Care Unit: a randomized trial

579. Quantitative and Qualitative Analysis of Bone Flap Resorption in Patients with Cranioplasty after Decompressive Craniectomy

596. Early VTE Chemoprophylaxis in TBI Patients Is Safe and Effective

Beverage Break in the AANS Exhibit Hall and Learning Center

583. Predictors of Primary Autograft Cranioplasty Survival and Resorption after Craniectomy

584. The rise of the Acinetobacter baumannii: A meta-analysis on role of intra-thecal anti-microbial therapy in reduction of mortality 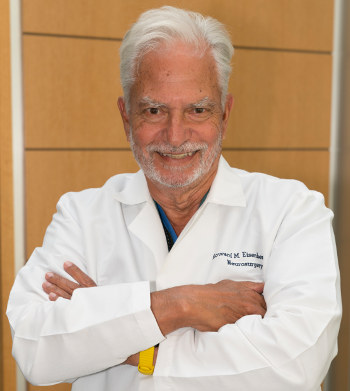 Dr. Eisenberg is the R.K. Thompson chair of the department of neurosurgery at the University of Maryland. He has special interests in brain tumors, skull based surgery, acoustic neuroma, epilepsy and movement disorders.

Dr. Eisenberg received his medical degree from the State University of New York which was followed by a two-year general surgery resident at New York Hospital - Cornell University School of Medicine. He completed his residency at Brigham Women’s and Children’s Hospital. After two years in the Navy, Dr. Eisenberg completed a research fellowship at Harvard, and was a junior faculty member there. From there he moved to University of Texas where he became chief of neurosurgery. He moved to the University of Maryland in 1993 as R.K. Thompson professor and chairman of the department of neurosurgery.