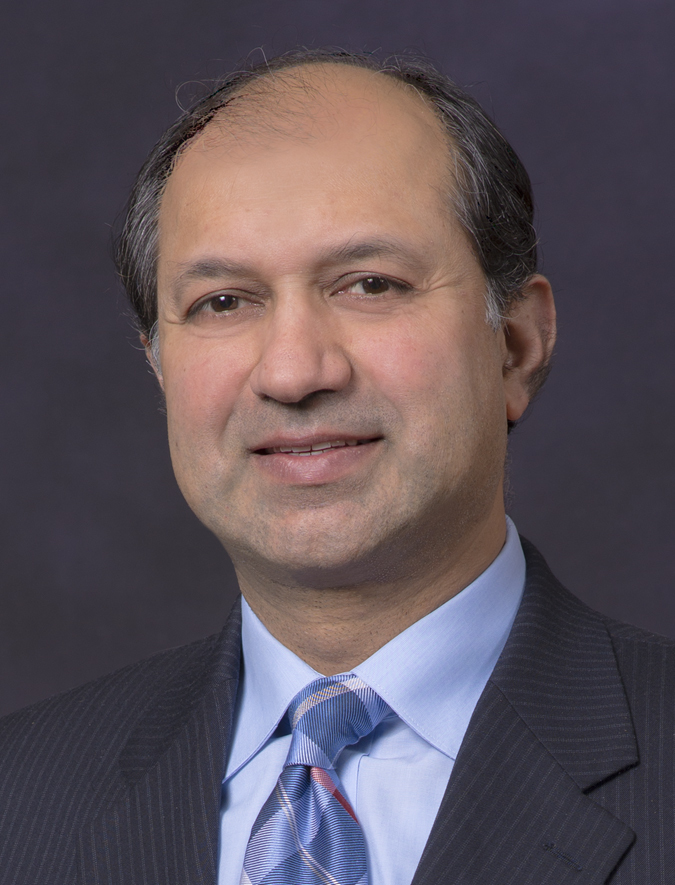 The brain is made up by many different cells, including neurons, which constitute the electric circuitry responsible for brain functions, and astrocytes, which provide the structure and support for neurons to work properly. Astrocytomas are tumors which originates from astrocytes, and, in adult individuals, they are the most common brain tumors. In the US, about 15,000 new astrocytomas are diagnosed every year. Males are slightly more affected than females, with a ratio of 1.3/1.

Tumor Grading and its Meaning

According to the World Health Organization (WHO) classifications of brain tumors, astrocytomas range from grade 1 (most benign) to grade 4 (most malignant). This grading, which is made by analyzing the tumor cells under the microscope is based on the following features: 1) how abnormal the cells look like (atypia); 2) how much they grow (mitosis); 3) presence of newly made blood vessels within the tumor (vascular proliferation). This is further integrated by the analysis of tumor’s genetic features, i.e. the DNA analysis of the tumor cells. Generally, with the exception of grade 1 tumors, which are most common in the pediatric population, most astrocytomas affect patients older than 40. Also, the older the patient, the higher the chances of the astrocytoma to be of higher grade.

Pilocytic Astrocytoma is a well circumscribed tumor and grows slowly. Most common in the cerebellum, i.e. the part of the brain located in the back of the head, just above the neck. It does not invade into the surrounding brain, thus when resected completely it is considered cured, and it does not require either chemotherapy or radiotherapy.

Pleomorphic Xantoastrocytoma most frequently originates in the temporal lobes and is commonly associated with seizures. Its cells can have many different shapes (pleomorphic), but usually do not show evidence of proliferation. Surgery is usually curative.

Subependymal Giant Cell Astrocytoma (SEGA) is most common in the younger population, usually in association with a familiar syndrome called tuberous sclerosis. It characteristically grows inside the ventricles, which are fluid-filled spaces deep into the brain, and can often block the normal outflow of this fluid, thus causing hydrocephalus. Surgical resection is usually curative.

Diffuse Astrocytoma is an invasive tumor, so there is no clear separation from the surrounding brain, and surgery itself might not be enough for its cure (this depends on several other factors described below). The tissue appearance is only moderately different from a normal brain, but cells appear abnormal under the microscope and slightly increased in number.

Anaplastic Astrocytoma is considered a more malignant evolution of a previously lower grade astrocytoma, which has acquired more aggressive features, including a higher pace of growth and more invasion into the brain. Histologically, it displays a higher degree of cellular abnormalities, and evidence of cell proliferation (mitoses), in comparison to grade 2 tumors. Surgery is never considered curative for these tumors, and needs to be followed by radiation and almost always chemotherapy.

Glioblastoma (GBM) is the most malignant, aggressive and common (60%) form of astrocytomas. Histologically, it is characterized by very abnormal-appearing cells, proliferation, areas of dead tissue and formation of new vessels. GBM can present either as a malignant progression from a previously existing lower grade astrocytoma (usually in 10% of cases) or originate directly as a grade 4 tumor (90% of cases). The former scenario is most common in younger patients, while the latter is most common after age 60. Regardless of its presentation, this tumor is a highly aggressive cancer, with pronounced brain invasion and destruction and very fast progression. 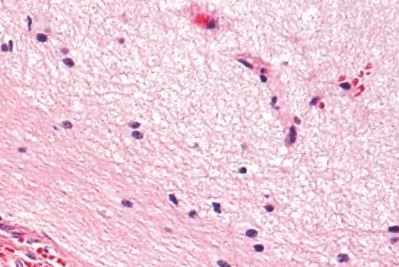 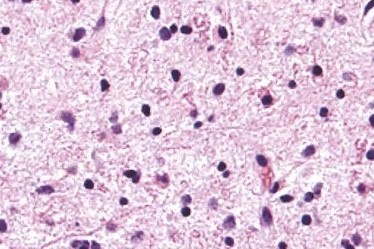 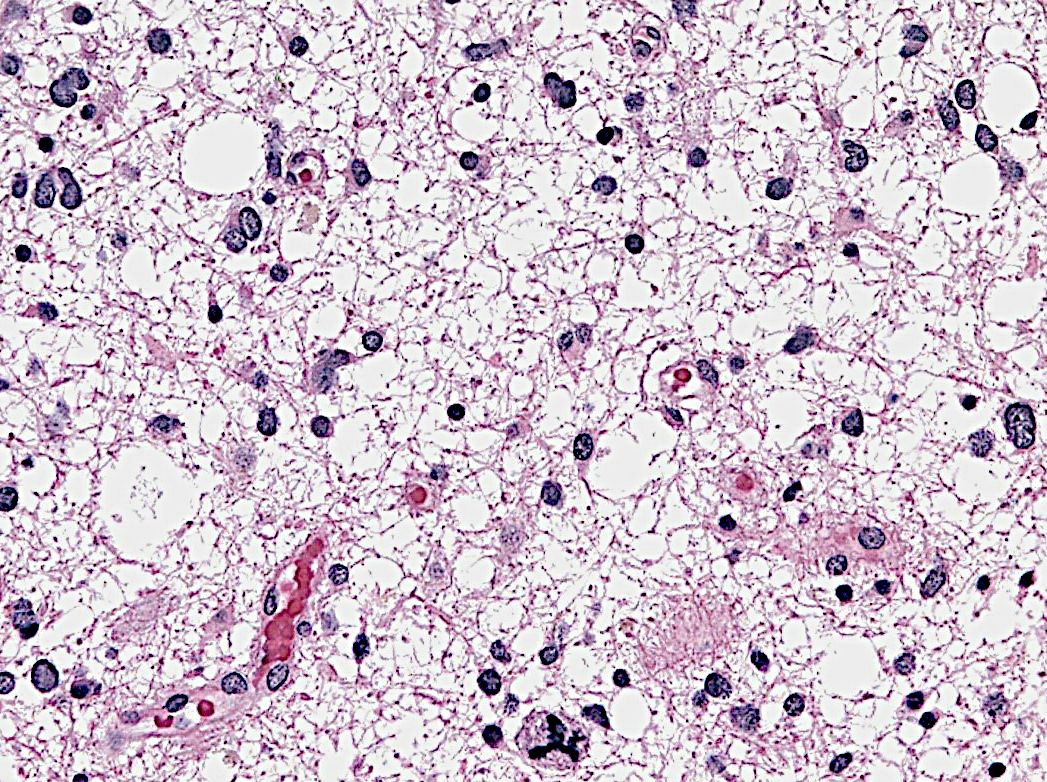 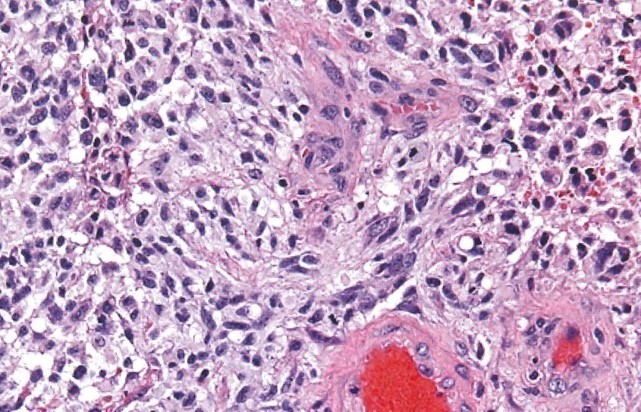 Over the past 15 years, there have been important strides in understanding this disease, mainly derived from significant advances in the ability to study its genetic and biologic underpinnings

Astrocytomas are, for the vast majority, sporadic tumors, meaning that they happen by chance, or at least, it is not yet known why these occur. There are only two situations with proven evidence to cause the tumor:

The clinical presentation of astrocytomas depends much more on their location within the brain, rather than their biologic characteristics. There are regions of the brain that can accommodate very large tumors before they become symptomatic (for example, the regions in the forehead), while there are other locations where even a small tumor can cause problems early on, like limb weakness or difficulty with speech or vision.

Generally, low grade astrocytomas tend to be of bigger size before they become symptomatic, as compared to more aggressive, higher grade astrocytomas. This is because lower grade tumors tend to displace the brain rather than destroying it, and also because they are associated with less brain swelling than malignant ones.

Common symptoms of astrocytomas are the following:

Conventional MRI: Magnetic resonance imaging (MRI) is the most important imaging study for astrocytomas. Usually, images are acquired both before and after the administration of IV contrast. As a rule of thumb, if the tumor picks up the contrast (i.e. becomes bright on images), it is an indication of a higher grade astrocytoma. 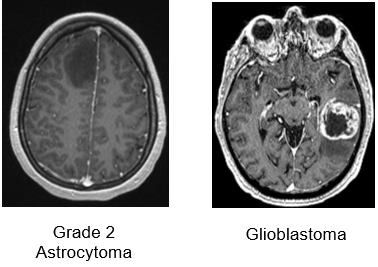 MRI spectroscopy (MRS): It is an imaging tool, based on MRI, which provides information on the chemical composition of the tumor, and works based on the fact that certain chemicals are abundant in the normal brain (for example, NAA), while others are abundant in tumors (for example, choline). The output of this imaging modality is a diagram showing the amount of each chemical in the area of the brain under analysis: If the amount of NAA is more than choline, that suggests a normal brain (see below). The opposite raises suspicion of a tumor. This technique can be considered as a non-invasive tissue sampling, although it is not as accurate or definitive as a standard biopsy. 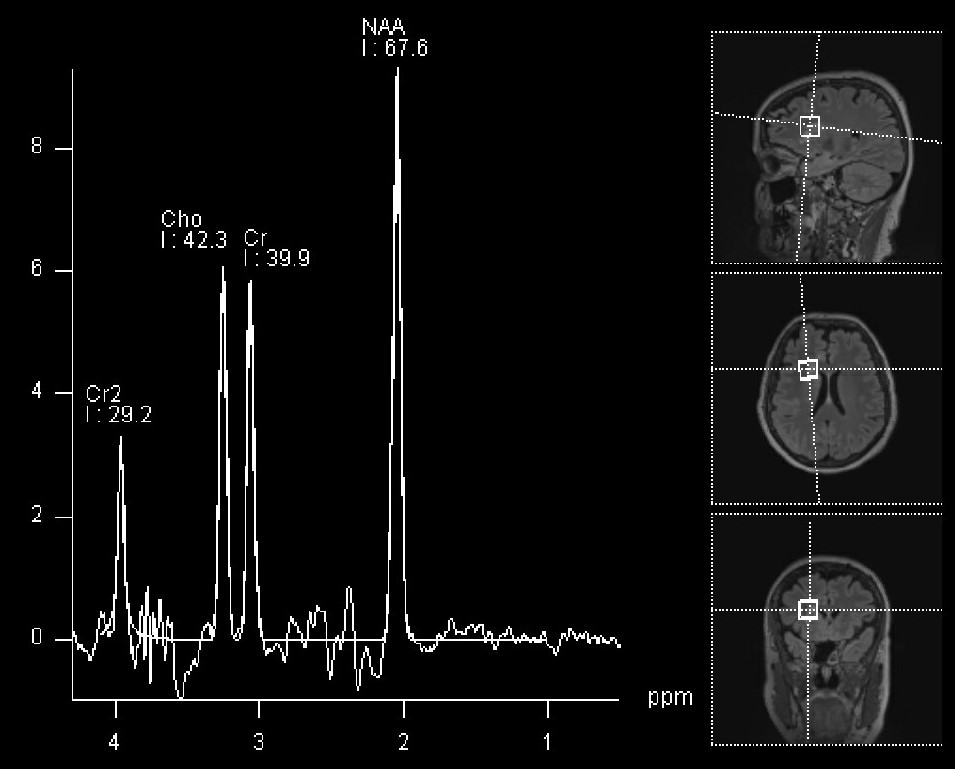 MRI spectroscopy of normal brain (sampled voxels are represented on the right side of the panel).
The NAA peak is the most prominent

Functional MRI (fMRI): fMRI is a useful technique to visualize in real time which parts of the brain become activated when the patient is asked to perform a certain task (for example talking, or moving one arm or leg). This is fundamental to define the regions of the brain which, if damaged, would cause problems to the patient. Activated brain is shown as a yellow/red signal (see figure below) superimposed to an otherwise standard MRI. For tumors that are localized in the proximity of critical areas (speech centers, motor cortex or visual cortex) fMRI provide an important adjunct, particularly in regards to surgical planning. 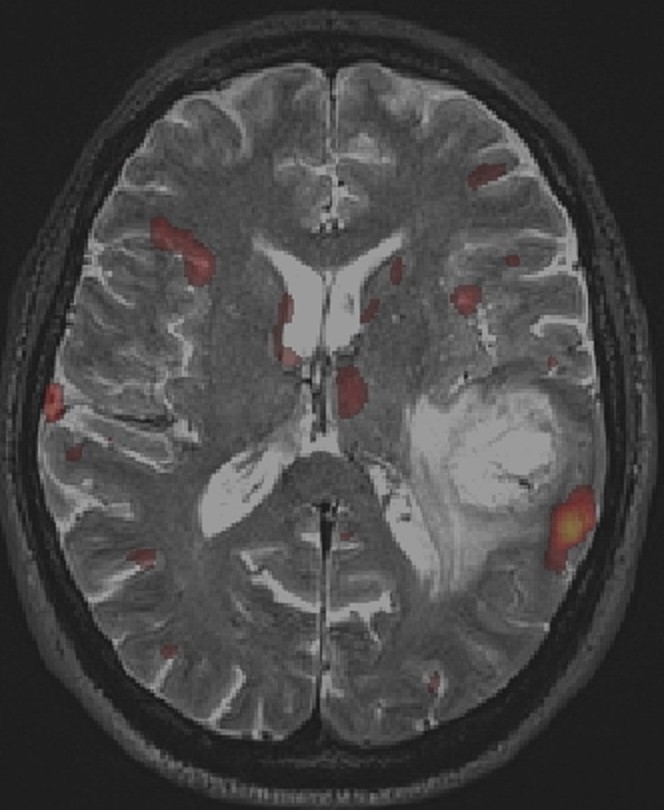 fMRI with BOLD imaging during object naming. The yellow/red BOLD signal displays significant activation in the left temporo-parietal region, in the expected anatomical area for language production, and in close proximity to the location of a glioblastoma

Surgery is the first step for the treatment of astrocytomas, as it provides two important benefits: First, it procures tumor tissue to establish a diagnosis. Secondly, it offers the possibility to remove as much tumor is safely possible to relieve mass effect, reduce swelling and facilitate response to adjuvant therapies, when indicated. The decision whether to perform a simple biopsy or a full resection depends on multiple factors, but particularly on the clinical and medical conditions of the patient, as well as the predicted extent of resectability of the tumor.

Important tools to maximize efficiency and safety of surgery are: 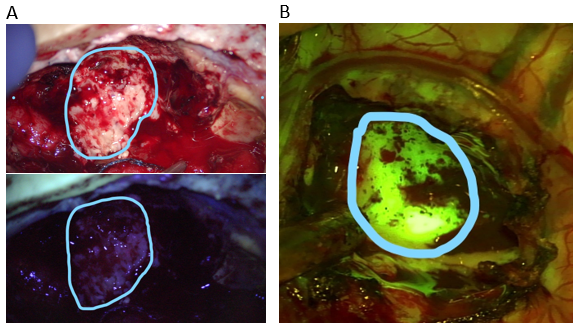 Intraoperative imaging of a recurrent high grade astrocytoma. Under white light (upper panel A) the tumor and necrotic portions are not clearly distinguishable. Under the blue-450 nm filter (lower panel A), the non-fluorescent darker portion represents radiation necrosis, while the bright magenta-pink fluorescence represents tumor tissue uptaking 5-ALA.

In another patient (panel B), the tumor is readily visible as a bright yellow-green hue after administration of fluoresceine and imaging with a 560 nm yellow filter

Astrocytomas, and in particular glioblastomas, are the target of intense research and every year several clinical trials are conducted to find new strategies which would improve survival. The most intense field of investigations are the following:

The major factors determining length of survival after a diagnosis of astrocytoma are the following: