Cushing's syndrome is a disorder caused by the body’s exposure to an excess of the hormone cortisol. Cortisol affects all tissues and organs in the body. These effects together are known as Cushing's syndrome.

Cortisol is a normal hormone produced in the outer portion of the adrenal glands. When functioning correctly, cortisol helps the body respond to stress and change. It mobilizes nutrients, modifies the body's response to inflammation, stimulates the liver to raise blood sugar and helps control the amount of water in the body. Cortisol production is regulated by the ACTH produced in the pituitary gland.

Pituitary adenomas are benign tumors of the pituitary gland that secrete increased amounts of ACTH causing excessive cortisol production. Most patients have a single adenoma. First described in 1912 by neurosurgeon Harvey Cushing, MD, in his book The Pituitary Body and Its Disorders, Cushing’s disease is the most common cause of spontaneous Cushing’s syndrome, accounting for 60-70 percent of all cases. 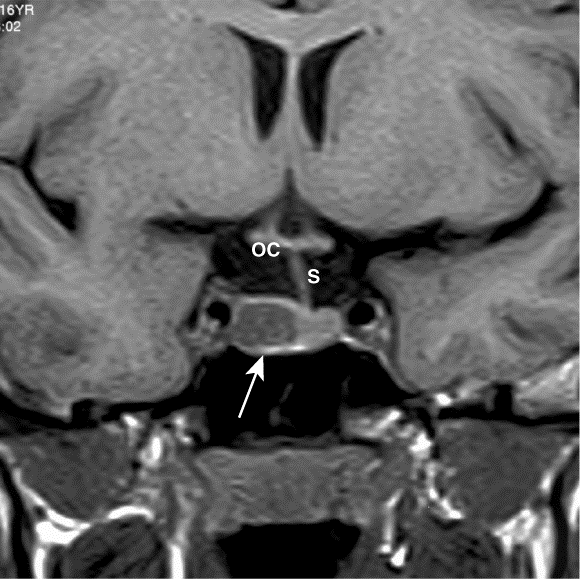 Some benign or malignant (cancerous) tumors that arise outside the pituitary gland can produce ACTH. This condition is known as ectopic ACTH syndrome. Lung tumors (malignant adenomas or carcinoids) cause more than 50 percent of these cases. Other less common types of tumors that can produce ACTH are thymomas, pancreatic islet cell tumors and medullary carcinomas of the thyroid.

An abnormality of the adrenal glands, such as an adrenal tumor, may cause Cushing's syndrome. Most of these cases involve non-cancerous tumors called adrenal adenomas, which release excess cortisol into the blood.

The diagnosis of Cushing's syndrome is based on clinical suspicion combined with a review of the patient’s medical history, physical examination and laboratory tests to help determine the existence of excessive levels of cortisol. A patient suspected of having Cushing’s syndrome must initially have an appearance suggestive of excess cortisol production combined with an elevated 24-hour urinary excretion of cortisol. In assessing the physical features of Cushing’s syndrome, it can often be beneficial to compare old and recent photographs to reveal the classic changes in facial and body appearance associated with this disorder.

The following tests can help determine if there are excessive levels of cortisol being produced:

After a definitive diagnosis has been made, the source must then be determined. The first step in distinguishing the underlying cause is the measurement of ACTH. Patients with ACTH-secreting tumors will either have a normal or elevated level of ACTH. In contrast, patients with an excess of adrenal cortisol will have a subnormal level. Performing a high-dose dexamethasone suppression test may be helpful in this situation. This test, similar to the low-dose dexamethasone suppression test, involves taking a high dose of dexamethasone (8 mg) at 11 p.m. then having blood drawn to screen for the presence of cortisol the following morning. In normal patients, the morning level of cortisol will again be very low. Patients with pituitary tumors will also suppress their serum cortisol level, but those with adrenal tumors will maintain a high level of cortisol production. A high level of cortisol points to a non-pituitary source.

The following tests are recommended:

Treatment of Cushing’s syndrome depends on the underlying cause of excess cortisol but may perhaps include surgery, radiation, chemotherapy or the use of cortisol-inhibiting drugs. If the cause is iatrogenic, from long-term use of glucocorticoid hormones to treat another disorder, the physician will gradually reduce the dose of the externally administered steroid to the lowest dose adequate for control of that disorder. Once control is established, the dose of glucocorticoid hormones may be given on alternate days to lessen side effects for the patient.

Microsurgical resection of an ACTH-secreting pituitary adenoma is the optimum treatment for Cushing’s disease with cure rates of 80-90 percent if a tumor is found. Surgery is most often done through a transnasal transsphenoidal approach, which will not leave a visible scar. This type of surgery may be performed, per the surgeon’s preference, using either a minimally invasive operating microscope or with the use of an endoscope. Partial removal of the pituitary gland (subtotal hypophysectomy) may be used in patients without clearly identifiable adenomas. 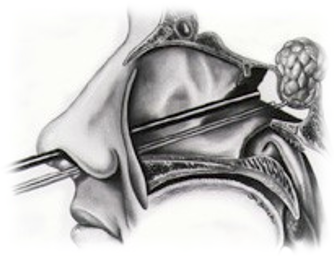 In patients to whom a remission is not obtained after surgery, the use of various medications that can inhibit cortisol production may be used, such as:

These agents are not as effective as surgery and are considered a second–line course of treatment. In some patients who are particularly resistant to all forms of therapy, removal of the adrenal glands bilaterally (bilateral adrenalectomy) may be considered.

Post-surgery, with successful tumor removal, the production of ACTH drops below normal. This decrease is natural and temporary, and patients are prescribed a synthetic form of cortisol such as hydrocortisone or prednisone to compensate this change. Most patients can discontinue replacement therapy within six to 12 months, but others may require the use of oral steroids for several years to, possibly, their lifetime. Patients who need adrenal surgery may also require steroid replacement therapy.

One additional treatment option in patients who have failed surgical procedures or are too high risk medically to bring to surgery is radiation therapy. Radiation therapy, which is administered over a six-week period to the pituitary gland, has yielded improvement in 40-50 percent of adults and up to 85 percent of children.

Stereotactic radiosurgery has also been found to be an effective treatment for patients with ACTH-secreting pituitary adenomas. A recent study demonstrated endocrine remission in 54 percent of patients and tumor-growth control in 96 percent. However, ongoing observation is required to monitor for tumor growth, disease recurrence, the development of new hormone deficiencies and damage to the optic pathways and brain.