Chiari malformation is considered a congenital condition, although acquired forms of the condition have been diagnosed. In the 1890s, a German pathologist, Professor Hans Chiari, first described abnormalities of the brain at the junction of the skull with the spine. He categorized these in order of severity; types I, II, III and IV. The term "Arnold-Chiari" was latter applied to the Chiari type II malformation. These malformations, along with syringomyelia and hydromyelia, two closely associated conditions, are described below.

The cerebellum controls the coordination of motion and is normally located inside the base of the skull, in what is referred to as the posterior fossa. Usually, the cerebellum is composed of two lateral halves, or hemispheres, and a narrow central portion between these hemispheres, known as the vermis. Along the under surface of the hemispheres, there are two small protrusions called the tonsils. The fourth ventricle is a space filled with cerebrospinal fluid (CSF) located in front of the cerebellum (and behind the brainstem). All of these structures are located just above the foramen magnum, the largest opening at the base of the skull through which the spinal cord enters and connects to the brainstem.

The prevalence in the general population has been estimated at slightly less than one in 1000. The majority of these cases are asymptomatic. Chiari malformations are often detected coincidently among patients who have undergone diagnostic imaging for unrelated reasons.

This malformation occurs during fetal development and is characterized by downward displacement by more than four millimeters, of the cerebellar tonsils beneath the foramen magnum into the cervical spinal canal. This displacement may block the normal pulsations of CSF between the spinal canal and the intracranial space. This form of Chiari malformation may be associated with syringomyelia/hydromyelia. It is diagnosed more commonly in adolescents or adults. 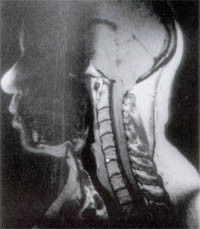 Anomalies of the base of the skull and spine are seen in 30-50 percent of patients with Chiari I malformation. These include

Many people with Chiari I malformation have no symptoms. However, any of the following symptoms may occur, alone or in combination. Some of the symptoms are related to the development of a syrinx (a fluid filled cavity in the spinal cord).

The symptoms associated with a Chiari II malformation can also be caused by problems related to myelomeningocele and hydrocephalus. These symptoms include

This malformation includes a form of dysraphism with a portion of the cerebellum and/or brainstem pushing out through a defect in the back of the head or neck. These malformations are very rare and are associated with a high early mortality rate or severe neurological deficits in patients that survive. If treatment is undertaken, then early operative closure of the defect is necessitated. Hydrocephalus, which is commonly present, must also be treated through shunting.

This malformation is the most severe form and the rarest. The cerebellum fails to develop normally. There may be other associated malformations of the brain and brainstem. Most babies born with this malformation do not survive infancy.

When CSF forms a cavity or cyst within the spinal cord, it is known as syringomyelia or hydromyelia. These are chronic disorders involving the spinal cord, and may be expanding or extending over time. As the fluid cavity expands, it can displace or injure the nerve fibers inside the spinal cord. A wide variety of symptoms can occur, depending upon the size and location of the syrinx. Loss of sensation in an area served by several nerve roots is one typical symptom, as is the development of scoliosis.

Syringomyelia can arise from several causes. Chiari malformation is the leading cause of syringomyelia, although the direct link is not well understood. It is thought to be related to the interference of normal CSF pulsations caused by the cerebellar tissue obstructing flow at the foramen magnum.

This condition can also occur as a complication of trauma, meningitis, tumor, arachnoiditis or a tethered spinal cord. In these cases, the syrinx forms in the section of the spinal cord damaged by these conditions. As more people are surviving spinal cord injuries, increased cases of post-traumatic syringomyelia are being diagnosed.

There are several tests that can help diagnose and determine the extent of Chiari malformation and syringomyelia, listed most common to least commonly ordered.

Treatment of Chiari malformations and syringomyelia is very dependent on the exact type of malformation, as well as progression in anatomy changes or symptoms.

Chiari I malformations that are asymptomatic should be left alone (this involves the majority of Chiari malformations).  There is no indication for "prophylactic" surgery on these. If the malformation is defined as symptomatic, or is causing a syrinx, treatment is usually recommended.

Chiari II malformations are treated if the patient is symptomatic, and physicians have determined that there are no complications from hydrocephalus. In some patients, consideration of a tethered cord is also explored. In many infants who become symptomatic from a Chiari II malformation, the symptom onset and progression are severe and rapid, and this requires an urgent or emergency approach.

Surgical treatment of these malformations depends on the type of malformation. The goal of surgery is to relieve the symptoms or stop the progression of the syrinx or symptoms.

Decompression is performed under general anesthesia. It consists of removing the back of the foramen magnum and often the back of the first few vertebrae to the point where the cerebellar tonsils end. This provides more space for the brainstem, spinal cord and descended cerebellar components. A tissue graft is often spliced into this opening to provide even more room for the unimpeded passage of CSF. In some patients the descended cerebellar components are debulked or removed. Occasionally, the cavity within the spinal cord resulting from hydromyelia can be drained with a diverting shunt tube. This tube can divert the fluid from inside the spinal cord to outside the cord, or be directed to either the chest or abdominal cavity. These procedures can be done together or separately.

Chiari II decompression is treated similarly, but is usually restricted to decompressing the tissues in the spinal canal and leaving the back of the skull alone.

The goals of Chiari surgery are

The benefits of surgery should always be weighed carefully against its risks. Although some patients experience a reduction in their symptoms, there is no guarantee that surgery will help every individual. Nerve damage that has already occurred usually cannot be reversed. Some surgical patients need repeat surgeries, while others may not achieve symptom relief.

Aperture: An opening or space between bones or within a bone.

Basilar impression: When the base of the skull is pushed “up” into the skull.

Brainstem: The portion of the brain connecting the spinal cord with the midbrain/cortex, which houses the controls of many basic functions such as breathing, swallowing and eye movement.

Cavity: An open area or space, such as a sinus, within a bone.

Central canal: A small tubular cavity in the center of the spinal cord which is normally not dilated.

Cerebellum: The portion of the brain which is in the posterior fossa. It is involved in coordination of movements.

Cranium: All of the bones of the skull except for the mandible.

Dura: The covering over the surface of the brain and spinal cord.

Dysraphism: Developmental abnormalities in the midline region of the back, with incomplete fusion or malformation of a seam, such as in all forms of spina bifida.

Foramen magnum: The opening at the base of the skull through which the spinal cord passes.

Hydrocephalus: A condition in which excess cerebrospinal fluid (CSF) builds up within the ventricles (fluid-containing cavities) of the brain and may increase pressure within the head.

Medulla oblongata: Lowest part of the brainstem, located just above the spinal cord, at the exit from the skull. Provides control for breathing and heart function.

Neurocranium: Referring to the braincase of the skull.

Pons: Band of nerve fibers linking the medulla oblongata and the cerebellum with the midbrain.

Posterior fossa: The cavity in the back part of the skull which contains the cerebellum, brainstem and cranial nerves 5-12.

Shunt: A tube which drains spinal fluid from one space to another body cavity.

Splanchocranium: Referring to the facial bones of the skull.

Suture: The saw-like edge of a cranial bone that serves as joint between bones of the skull.

Syrinx (syringomyelia, hydromyelia): These terms all refer to a fluid filled cavity in the spinal cord.

Tonsils: The portion of the cerebellum that protrudes into the spinal canal, which may become elongated.

Vallecula (of cerebellum): The longitudinal hollow on the inferior surface of the cerebellum, between the hemispheres, in which the medulla oblongata rests.

Ventricles: Fluid-filled cavities within the brain. The spinal fluid is produced by a gland in the ventricle (about two pints each day) and circulates through the ventricles and over the surface of the brain into the veins. If there is a block in the system, the fluid can build up and cause hydrocephalus.

Read the Story of a Patient Diagnosed with Chiari Malformation