Azalea Butler is an adorable 4-year-old with Noonan Syndrome, which has caused a multitude of health conditions, including Chiari type I malformation and syringomyelia, bone abnormalities, heart disease, among others.

Noonan syndrome is a genetic disorder that prevents normal development in various parts of the body. Characteristics may include unusual facial features, short stature, heart defects, chest deformities, eye problems, other physical abnormalities and developmental delays. The incidence of Noonan syndrome is estimated at one case in 1,000 to 2,500 live births. 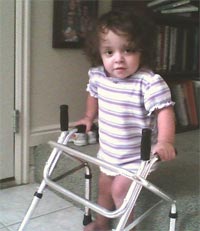 Chiari type I malformation occurs during fetal development and is characterized by downward displacement, by more than four millimeters, of the cerebellar tonsils beneath the foramen magnum into the cervical spinal canal. This form of Chiari malformation may be associated with syringomyelia. When cerebrospinal fluid (CSF) forms a cavity or cyst within the spinal cord, it is known as syringomyelia. As the fluid cavity expands, it can displace or injure the nerve fibers inside the spinal cord.

Dr. Walker operated on Azalea for her Chiari and syringomyelia, in August 2005 and August 2007 at Primary Children’s Medical Center.

In the Words of Azalea’s Mother

Dr. Walker has performed two miraculous surgeries on Azalea. In 2005, Azalea would cry and experience somewhat severe pain/discomfort when she was placed on her tummy and arched her head up. Azalea could only drink formula and experienced difficulty swallowing. Even pureed food with the consistency of baby food would cause her to vomit regularly and gag.

Decompression surgery was performed with the goal of providing more space for the brain stem, spinal cord and descended cerebellar components. This can help relieve or stop the progression of the syrinx and/or symptoms by decompressing nerve tissue and restoring normal CSF flow around and behind the cerebellum.

After her surgery, all of Azalea’s eating issues were resolved. While Azalea was still recovering in the hospital post-surgery, she was able to eat noodles and toddler food, and that was so exciting to see! After that, she could arch her head up without any difficulties or pain.


Our family is Hispanic, and Dr. Walker is very respectful of cultural issues. He is not only a gifted neurosurgeon but has an amazing bedside manner. It is evident that he cares deeply about his patients, and I especially appreciate that he is always willing to listen to the "mommy opinion." Little Azalea just adores him!