Intracerebral hemorrhage (bleeding into the brain tissue) is the second most common cause of stroke (15-30% of strokes) and the most deadly.

Blood vessels carry blood to and from the brain. Arteries or veins can rupture, either from abnormal pressure or abnormal development or trauma. The blood itself can damage the brain tissue. Furthermore, the extra blood in the brain may increase the pressure within the skull (intracranial pressure (ICP)) to a point that further damages the brain. 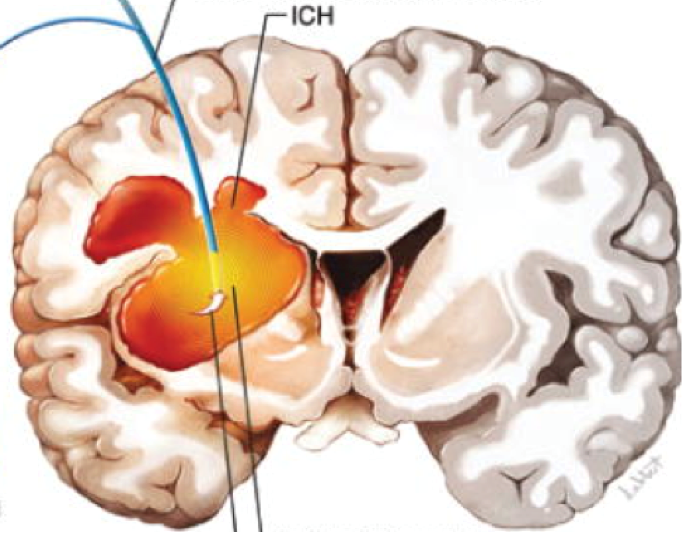 Hypertension: chronic high blood pressure causes changes to the arteries of the brain which can make them much more likely to rupture.

Age: more common after age of 55, with buildup of protein in walls of arteries called amyloid angiopathy.

Race: affects African Americans and Asians more than whites; likely related to higher prevalence of Hypertension in those races.

Liver disease: increases risk due to issues with blood clotting.

Use of blood thinners.

Intracerebral hemorrhage can be characterized by a smooth progressive onset over minutes to hours, but can also be like ischemic stroke, with sudden onset of symptoms. Symptoms depend on location of hemorrhage an include:

When & How to Seek Medical Care

A non-contrast computer tomography (CT) scan of brain is the diagnostic study of choice. CT or magnetic resonance (MR) angiogram is recommended (once the patient is stabilized).

Some patients may experience delayed deterioration due to re-bleeding, swelling, hydrocephalus (accumulation of fluid due to blood or brain swelling blocking natural drainage pathways) and seizures.

Treatment focusses on stopping the bleeding, removing the clot and relieving pressure on the brain. If left alone, the brain will eventually re-absorb the clot. The damage done by increased brain pressure over a long period may be irreversible.

Candidates for non-surgical treatment are patients with:

Candidates for surgical treatment are patients:

Apparatus for the SLEUTH study. Left: A standard EVD catheter with a small ultrasound-emitting probe (EKOS) inserted in the catheter tip fenestration. Right: Illustration showing stereotactic insertion of the ventricular catheter with the EKOS US microcatheter (upper). The tip of the catheter assembly is seen within the intraparenchymal clot (lower). Printed with permission from the Swedish Neuroscience Institute. (https://thejns.org/focus/view/journals/neurosurg-focus/32/4/2012.1.focus11362.xml)

The ICH score was developed to provide a clinical grading scale for ICH that helps standardize clinical treatment protocols and clinical research studies in ICH. The score was developed at UCSF, with the original study analyzing 161 patients presenting with ICH 1997-98. Overall, the analysis helps provide information about the degree of severity of ICH as well as 30-day mortality rates that helped guide decision-making.

Patient Pages are authored by neurosurgical professionals, with the goal of providing useful information to the public.

Neel T. Patel, MD, is a neurosurgery resident at the Penn State College of Medicine at the Milton S. Hershey Medical Center in Hershey, Penn.

Scott D. Simon, MD, FAANS, is an associate professor of neurosurgery at the Penn State College of Medicine at the Milton S. Hershey Medical Center in Hershey, Penn. He specializes in cerebrovascular and endovascular neurosurgery and his research interests include cerebrovascular device design and retro-viral delivered gene therapy for neural regeneration.

The AANS does not endorse any treatments, procedures, products or physicians referenced in these patient fact sheets. This information provided is an educational service and is not intended to serve as medical advice. Anyone seeking specific neurosurgical advice or assistance should consult his or her neurosurgeon, or locate one in your area through the AANS’ Find a Board-certified Neurosurgeon online tool.