Like an estimated 400,000 other Americans, most over the age of 60, Harold Marcus was suffering for several years from the symptoms of lumbar spinal stenosis. This condition is a narrowing of the spinal canal which compresses the nerves traveling through the lower back into the legs. Lumbar spinal stenosis may or may not produce symptoms, depending on the severity of the case. The inflammation of the nerves due to increased pressure, rather than the narrowing of the canal, causes noticeable symptoms to occur. 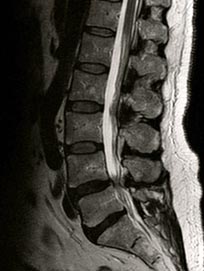 Harold was treated for a period of time through conservative, nonsurgical methods. After a while, like many patients with chronic spine-related leg pain, he decided to look at other options. Harold was considered a good candidate for back surgery because his back and leg pain was limiting his normal activity and impairing his quality of life; he was having difficulty standing or walking; medication and physical therapy had proven ineffective; and he was in reasonably good health. After contemplating his choices, Harold decided to have back surgery, which was performed on Dec. 7, 2007.

For several years, I suffered from severe leg pain when standing or walking for more than 20-30 minutes. The pain subsided almost immediately after sitting down. In April 2007, my internist referred me to a neurologist at Weill Cornell who diagnosed lumbar spinal stenosis, which was confirmed through an MRI. After two months of physical therapy and medication, my symptoms had not improved. I was referred to the chief of spinal surgery at Weill Cornell, Dr. Hartl. He reviewed my records and indicated that I was a good candidate for surgery.

Dr. Hartl said that in general, the laminectomy procedure is especially effective in alleviating the leg symptoms associated with lumbar spinal stenosis, with about 70-80 percent of patients reporting significant improvement in their function (ability to perform normal daily activities) and markedly reduced level of pain and discomfort.

I hesitated initially because of extensive published data I had read questioning the benefits of back surgery. However, in November 2007, I visited Dr. Hartl for a second time and told him that I was ready to have the surgery.

On Dec. 6, 2007, Dr. Hartl inserted two titanium rods between vertebrae number 4 and 5 in addition to the laminectomy. This was necessary because of my misaligned vertebrae. I am happy to report that since my recovery, I have actually been completely pain free, which from a statistical standpoint, puts me in an even better range than the 70-80 percent of patients.