Christine Coles was diagnosed with Parkinson’s disease (PD) at the age of only 39. While PD usually develops after the age of 55, the disease may affect people in their 30s and 40s, such as actor Michael J. Fox, who was diagnosed at age 30. The majority of PD patients are treated with medications to relieve the symptoms of the disease, which work with varying degrees of effectiveness. After being treated for a few years with medication therapy, Christine’s neurologist recommended that she consider deep brain stimulation (DBS) to help alleviate her tremors. 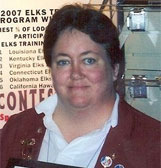 Christine underwent subthalamic nucleus DBS surgery on June 23, 2005. DBS is presumed to help modulate dysfunctional circuits in the brain so that the brain can function more effectively. This is accomplished by sending continuous electrical signals to specific target areas of the brain, which block the impulses that cause neurological dysfunctions, such as tremors, slowness and rigidity. Christine feels that DBS has made all the difference in the world for her.

Parkinson's disease (PD) symptoms became obvious to me in June 2002, one year after my maternal grandmother passed away. She too had suffered from PD, and as her caregiver for 15 years, I watched a vibrant woman wither away.

I noticed symptoms, mostly a stiff and somewhat shaky left arm, in November 2001. After denial and curiosity got the better of me, I saw my grandmother's neurologist in June 2002. He ordered a few tests, including a brain MRI and some blood work, to rule out a tumor as the cause of my stiffness and tremulous body. The harsh reality was that I too had become a victim of PD, but I was only 39: this was the worst possible news for me to hear. In April 2002, my doctor in Norfolk sent me to see medical specialists at the University of Virginia in Charlottesville. I met their neurologist and underwent treatment with him for one year, after which he sent me to see the deep brain stimulation (DBS) team.

I met my neurosurgeon, Jeffrey Elias, MD, and his team in April 2005. They did a thorough evaluation to determine if DBS would be appropriate for me and help alleviate my tremors. I was accepted for this procedure by the team, consisting of Dr. Elias; Madaline Harrison, MD, the neurologist; and Robert Frysinger PhD, the neurophysiologist. The team took a good deal of time to describe the process, which involved many things, including wearing a frame. Although I am very claustrophobic, I managed to cope and had the surgery on June 23, 2005.

Two weeks later, on July 7, 2005, I returned to Charlottesville to have the DBS programmed by Dr. Frysinger. Though it felt somewhat strange, it did eventually work. I returned about every two weeks to get the settings and/or medication adjusted. One nice benefit was that I was able to reduce my medications by about 50 percent with the DBS system in place. Initially, I told my friends that I had probably not felt this good for 10 years!

It took five to six programming sessions before I was tremor-free. Though I am not sure how long the therapeutic effects will last as the disease progresses, DBS can be a very effective treatment for PD when put in place by the skilled hands of a good team.

In November 2005 the system became infected, which unfortunately does happen, and it had to be removed. I was treated with antibiotics and cleared to have the system put back in place on December 28, 2005. I was so grateful to wake up with it back in! That experience truly made me realize how much DBS had done for me. I would most certainly be retired by now if the system was not in place.