The pituitary is a small gland attached to the base of the brain (behind the nose) in an area called the pituitary fossa or sella turcica. The pituitary is often called the "master gland" because it controls the secretion of most of the hormones in the body. A normal pituitary gland weighs less than 1 gram and is about the size and shape of a kidney bean.

The function of the pituitary can be compared to that of a household thermostat. The thermostat constantly measures the temperature in the house and sends signals to the heater to turn it on or off to maintain a steady, comfortable temperature. The pituitary constantly monitors bodily functions and sends signals to remote organs and glands to monitor their function and maintain the appropriate environment. The ideal "thermostat" setting for a body depends on many factors, including level of activity, gender, body composition, etc.

The pituitary is responsible for controlling and coordinating the following:

The anterior pituitary accounts for about 80 percent of the pituitary gland size and is composed of the anterior lobe and the intermediate zone. The anterior lobe is responsible for producing the majority of the signaling hormones released into the blood stream. The posterior pituitary gland develops very early in life and does not produce any hormones on its own. However, it does contain the nerve endings of brain cells (neurons) that arise from the hypothalamus. These neurons produce the hormones vasopressin and oxytocin which are transported down the pituitary stalk into the posterior pituitary. They are stored for later release into the bloodstream.

The pituitary and hypothalamus work together to regulate the daily functions of the body as well as play an essential role in growth, development and reproduction. The hypothalamus secretes two types of hormones (releasing hormones and inhibiting hormones) that control secretion of other hormones from the anterior pituitary. The pituitary gland performs its key functions by releasing several signaling hormones that consequently control the activities of other organs.

The pituitary produces the following hormones:

Pituitary adenomas are the fourth most common intracranial tumor after gliomas, meningiomas and schwannomas. A large majority of pituitary adenomas are benign and are relatively slow growing. Adenomas are by far the most common disease affecting the pituitary gland. These tumors most commonly affect people in their 30s or 40s, although they can be diagnosed in children as well. Most of these tumors can be successfully treated. Pituitary tumors can vary in size and behavior. Tumors that produce hormones are called functioning adenomas, while those that do not are called nonfunctioning adenomas.

Tumors smaller than 10 millimeters are called microadenomas and often secrete anterior pituitary hormones. These smaller, functional adenomas are usually detected earlier because the increased levels of hormones cause abnormal changes in the body. Approximately 50 percent of pituitary adenomas are diagnosed when they are smaller than 5 millimeters in size. Adenomas larger than 10 millimeters (the size of a dime) are called macroadenomas and usually do not secrete hormones. These tumors are often discovered because they produce symptoms by “mass effect,” compressing nearby brain or cranial nerve structures.

The symptoms of a pituitary tumor, other than mass effect, generally result from endocrine dysfunction. For example, this dysfunction can cause overproduction of growth hormones, as in acromegaly (gigantism), or underproduction of thyroid hormone, as in hypothyroidism. Hormonal imbalances can impact fertility, menstrual periods, heat and cold tolerance, as well as the skin and body in other ways.

Because of the pituitary gland’s strategic location within the skull, tumors of the pituitary can compress important brain structures as they enlarge. The most common circumstance involves compression of the optic nerves leading to a gradual loss of vision. This vision loss usually begins with a deterioration of peripheral vision on both sides.

The presence of three or more of the following symptoms may indicate a pituitary tumor: 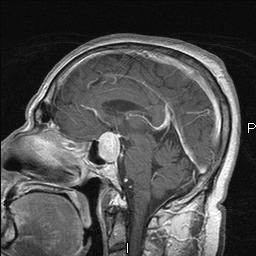 When a pituitary tumor is suspected, a physician will perform a physical examination as well as vision testing to detect visual field deficits, such as loss of peripheral vision. Hormone testing of the blood and urine and imaging studies of the brain are used to confirm diagnosis. The most accurate diagnostic imaging test is magnetic resonance imaging (MRI), performed with and without a contrast agent.

Early intervention provides the best chance for cure or control of a pituitary tumor and its side effects. There are three types of treatment used for pituitary tumors: surgical removal of the tumor, radiation therapy using high-dose x-rays to kill tumor cells and medication therapy to shrink or eradicate the tumor.

The transsphenoidal approach involves accessing the tumor through the nasal cavity using either a microsurgical or endoscopic approach, whichever the surgeon prefers. Surgery is usually combined with the use of computer guidance, allowing a minimally invasive approach. Transsphenoidal surgery is invariably the procedure of choice in small “functional” adenomas and in most macroadenomas, with the exception of prolactinomas. In prolactinomas (prolactin hormone-secreting microadenomas or macroadenomas), the use of a specific dopamine agonist medication is generally advised with surgery reserved for those tumors failing to show a good response to the treatment. Transsphenoidal surgery is generally very well tolerated because of its minimally invasive characteristic, few side effects and quick patient recovery. Patients can often leave the hospital as early as two to three days after surgery.

The transcranial approach, or craniotomy, is less commonly used and reserved for particularly large and invasive tumors which cannot be safely removed through the transsphenoidal route.

Radiation therapy uses high-energy x-rays to kill abnormal pituitary tumor cells. Radiation is extremely effective in stopping tumor growth and, with time, will lead to tumor shrinkage. Radiation therapy may be an option if the tumor cannot be treated effectively through medication or surgery.

There are three types of radiation suggested:

Standard external beam radiotherapy uses a form of radiation called photons. These photons are generated by the use of a linear accelerator. Treatment is generally delivered in fractions, one treatment or “fraction” a day, five days a weeks for four to five weeks.

Stereotactic radiosurgery (Gamma Knife, Novalis BrainLab and CyberKnife) combines standard external beam radiotherapy with a technique that focuses the radiation through many different ports. This treatment tends to sustain less damage to tissues adjacent to the pituitary and can be delivered in fewer sessions.

Prolactinomas are the most common secreting pituitary adenoma seen clinically. In general, medical therapy is the first course of treatment. With medical management, about 80 percent of patients have prolactin levels restored to normal through dopamine agonist therapy. The most commonly used agents are bromocriptine or cabergoline. The size of the tumor will be reduced in the majority of patients to varying degrees, often resulting in improved vision, resolution of headaches and restored menstruation and fertility in women.

Cabergoline is currently the most commonly used of the two drugs, having less side effects and usually requiring only a twice a week dosing schedule. Bromocriptine requires a once a day dosing regime and generally has more side effects including gastrointestinal upset, nausea and dizziness with getting up too fast. Cabergoline has also been shown to be effective in patients who are resistant to bromocriptine therapy.

In patients with microadenomas, dopamine agonist therapy is usually attempted first for a period of several months. If the tumors do not respond to medication therapy, then surgery is considered. In general, the recommendation is that it is done within six to 12 months of the start of the medication therapy.

Medications used in the treatment of other functional adenomas include: